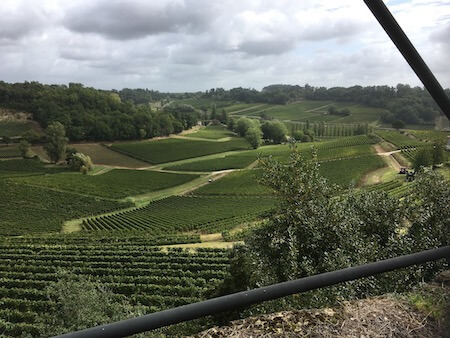 We left the flat gravels of the Left Bank, and headed inland.  Over the Gironde within Bordeaux city, and crossed Entre-Deux Mers, an area we are not visiting on this trip; the scenery was already more varied and rolling.  Then crossed the very muddy Dordogne (a lot of silt washing down after the recent rains), and we climbed gentle slopes, skirted Saint Emilion town, and headed into increasingly hilly terrain, still surrounded by vineyards, some with pickers already at work.

Our morning’s visit was to Château La Croizille, and its sister estate, Château Tour de Baladoz.  But first a word about Classification.  Skim down five paragraphs if you aren’t interested.

I was so busy talking about terroir yesterday that I had no energy to consider what Tim told us about Classification.  But like the unique soils, it is uniquely important to Bordeaux.  While Appellation rules are broadly just that, rules about location, grape variety, yields, alcohol %’s etc, with no guarantees about quality, Classifications are based on judgements of quality, albeit at a point in time.

The most famous, ie the Left Bank Classifications of 1855 for the Haut-Médoc and Sauternes and 1953 for Graves are not subject to revision, and perhaps for this reason have stood the test of time – people in the know understand any indiosyncracies (many 5th classed growths can be a lot more expensive than 2nd growths etc), and the châteaux and domaines are in control of how they promote themselves.

The Cru Bourgeois system, initiated in 1966 so that other producers in the Médoc could have their quality confirmed, has proved more contentious.  The classification was revised in 1978, annually between 1985 and 1999, and in 2000 a new government approved system was introduced, to encourage further improvement, but the 2003 classification was immediately denounced by the ‘losers’ and was annulled.  A new system was authorised from 2009, which takes place annually, based on strict requirements for vineyard and winery practice and a blind tasting of a number of vintages.

In Saint Emilion however, things were even trickier.  A classification took place in 1954, under the auspices of the INAO (the national appellation body), with six further roughly 10 yearly classifications taking place.  In 2006 the ‘relegated’ estates took legal action, and the classification was decreed invalid and the 1996 one reinstated.  A new procedure was introduced, and the 2012 classification still stands.  There are 64 Grand Cru Classé estates, 18 Premier Grand Cru Classé estates of which four are designated ‘A’.  Strangely the other 14 tend not to call them selves ‘B’.  Just to confuse things around 200 châteaux use a historical designation of ‘Grand Cru’ which is now completely meaningless.

So does all this help the buyer?  It should: any bottle of Bordeaux with the words Cru Classé on it has earned, and needs to continue to earn, its reputation.  Of course this comes with a price tag.

At our morning visit we learnt something of the importance of this classification to an ambitious vigneron. The Belgian de Schepper family who own La Croizille and La Tour Baladoz have made a number of strategic investments in these exquisitely pretty estates.  Aurélie, our host, whose family have an estate in Pomerol, described the terroirs – La Croizille has the ‘better’ land, with blue clay on limestone on a terrace, sloping down to a sandy slope. This blue clay is apparently the same as the soil under Pétrus in Pomerol, so very suited to Merlot, while the free draining sandy soil is good for Cabernet Sauvignon. The two estates are therefore managed totally separately as it is La Croizille that will be entered for the next classification judgement.

This became very apparent in the two wineries, La Tour Baladoz is very traditional with cement tanks of different sizes to cope with the different plots of vines, but still a big investment in oak barrels with the the first wine (from the best parcels of vines) spending 15 months in mainly new French oak, and the second wine spending 12 months in 2 year old barrels. Aurélie explained that a new barrel will cost €800, no wonder if a single oak tree will only produce enough wood for two barrels. The resale value of used barrels is €50!

The winery for La Croizille is brand new, beautifully designed to reflect the terroir of the estate. An ancient well was discovered when they were building the winery, and we peered down into it. Grapes are hand picked, sorted using an optical sorter, fermented in stainless steel tanks, and then spend 2 years in 100% new French oak, which are mounted on wheels to assist gentle stirring during the first year rather than the more violent bâtonnage (inserting a stick into the barrel and swirling the contents around). The focus is on minimum air contact, to ensure top quality.

Our tasting of three wines from each estate demonstrated that both are fantastic. Baladoz, with the more traiditional blend of mainly Merlot had rich ripe plummy fruit, with good tannins that mellowed as we tasted the consecutive vintages (2016, 2015, 2014). Direct comparison with La Croizille was difficult as we tasted older vintages, and the wine has much more Cabernet Sauvignon (around a third in 2011 and 2009, 50% in 2010), so we focussed on enjoying the vibrant fruit, well balanced with lovely ripe tannins. The family will have to submit 10 vintages of the wine for the 2022 classification, and if we were voting, it would be a shoe-in! 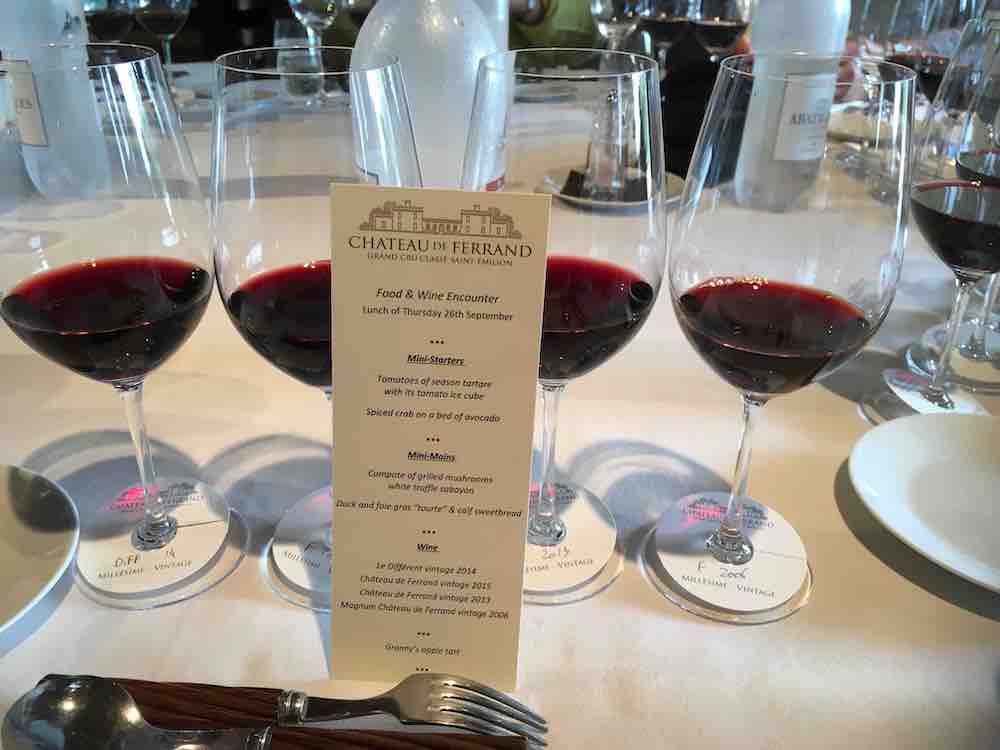 Our second visit, to Grand Cru Classé estate Châteaux de Ferrand confirmed that classification does mean quality, when we tasted their 2016 and 2009 vintage in a tutored tasting, and then their 2015, 2013 and 2006 vintages over lunch.  Their second wine, Le Différent, was also excellent!

The Ferrand visit was great fun.  It’s a fabulous estate, with a 300 year old château, recently renovated by the Bich family (of Bic pens and razors), who have also invested in the 40 hectares, focusing on Merlot and Cabernet Sauvignon, and a beautiful winery and restaurant. 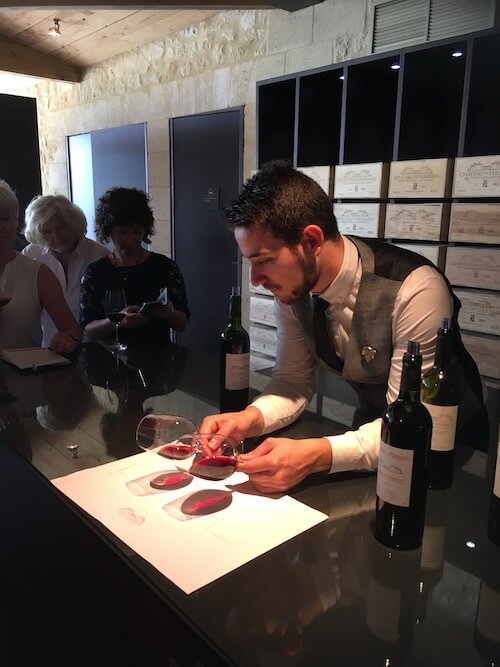 Charlie, our host, is a professional sommelier, and introduced a completely new dimension to our visit – a tutored food and wine pairing, in the form of a competition.  Having shown us how to see the evolution of a wine by examining the ‘flame’  – looking at what is projected through the tilted glass from a light source to a white surface (the fading even more clear than how I normally examine it by looking at the rim of the wine in the tilted glass), he insisted we first took the nose before swirling the content of the glass (which can disguise faults), and was then insistent we gave the wine a proper Listerine-style mouthwash to ensure we experienced all the flavour components.

Our paired food and wine tasting was great.  We had a ready supply of the four wines, and served two starters (a tomato tartare and spiced crab on avocado) and two main courses (a compote of mushrooms with truffle sabayan, and a duck and foie gras ‘tourte’), and we had to submit our view of which wine went best with which course to Charlie, who ruthlessly marked our answers.  We were very proud that our group produced five winners (all with 100% ‘correct answers’ – ie in agreement with Charlie), whereas last week’s tour had only produced a single winner.

The lucky winners clutching their winning bottles of Château de Ferrand, we sadly departed, taking a good look at the incoming grapes (the intake to the winery is right next to the restaurant), as we left.  Glorious sunshine, fabulous views – what a lovely day.