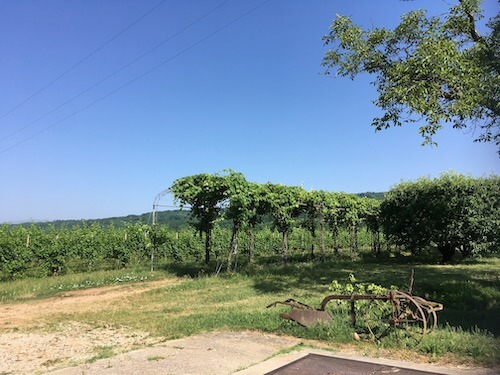 About an hour’s drive to the east of Bassano del Grappa is the town of Venegazzù, home of the Loredan Gasparini estate.  Here, Giancarlo Palla and his son Lorenzo make prosecco under the Asolo DOCG and red wines under the Montello DOC.

Lorenzo greeted us and under some shade he described the unique terroir of the Montello hill beside us, created by tectonic plate movement, with red, iron rich soil in the Venegazzù DOC just at the bottom of the slopes,  on which red varieties are grown, while Glera grapes are further up the stony slopes.

We then made our way into the winery, to hear about the long history of the estate, which was founded by descendants of the Loredan Doges of Venice.  Oak was harvested for ships and buildings, and vines planted.  Oak is used in the traditional large barrels used for maturing wines, and the barriques used for the Montello DOC reds.

The Count Loredan studied in Bordeaux and introduced varieties such as Malbec, Cabernets Sauvignon and Franc and Merlot to the area, where they thrived on the same latitude as Bordeaux, but with higher altitude instead of a maritime climate.  Giancarlo Palla bought the estate in the 1970s and developed their reputation for both prosecco and red wines, a reputation that our tasting of six wines confirmed!

Three proseccos, of increasing quality, were such a cut above what we drink back home it was hard to believe they came from the same place.  Elegant and fragrant, but with lovely fruit structure and mouthfeel, they were stunning.  Particularly lovely was the Cuvée Indigena, which is made by sealing the tank towards the end of the first fermentation, and bottling the result.  Lorenzo developed the process when experimenting with different indigenous yeasts, and it is now a wine in its own right.  Sadly we drank the last of the 2017 (only made in magnum).

The reds were equally impressive.  A Malbec that was so fresh and vibrant it was hard to compare with the bigger wines we are accustomed to from Argentina and the south of France. And two bordeaux blends that on the nose could have been from the Médoc, but on the palate had distinctively complex characters, with black and red fruits, herbs, pencil shavings and a superb finish – my favourite of the morning was the Della Casa (2012 vintage), but the Capo di Stato 2007 was a very serious wine indeed (and we were most entertained by the story of it being named after De Gaulle was given it to drink at a reception and declared it was a fine Bordeaux!).

We tasted some more wine with some cheese and charcuterie and then bade our farewells, to a beautiful place, with a lovely family, making superb wine.