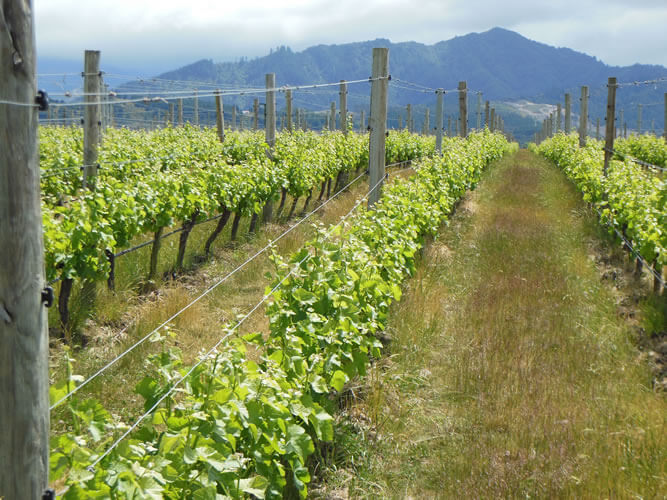 Click here to read what my clients said about this tour

On the three tours I ran to New Zealand in 2014 we discovered, of course, a fabulously beautiful country with lovely wine.  But our overriding memories were of the people we met – who lavished their time upon us and gave us the most wonderful insights into winemaking – while, of course we learnt about and very much enjoyed their wine.

Each tour startedted in Napier, in Hawkes Bay.  In the Gimblett Gravels, at Trinity Hill, we were taken on a voyage of discovery by winemaker Warren Gibson and learnt about the potential of this very recently ‘discovered’ winegrowing region.  We tasted some superb Syrahs, culminating in the Homage 2010, which was stunning but still had massive ageing potential.  At  at De La Terre, owners Tony and Kaye Prichard took us through the fantastic range of grape varieties that flourish in New Zealand while at Craggy Range we were wowed by the iconic winery (and even did some tasting from barrel).

We also managed to visit the Wineworks bottling facility, which is pretty well certain to have bottled something you have drunk!  And met a cork importer who was inspecting 2,000 corks a day to ensure quality and stem the tide of Kiwi wine moving into screwcap.

En route to Martinborough we called in to the Pukeora Estate, founded in the last few years on the site of an old sanatorium, and learnt about the challenges of setting up a winery from scratch, and on a budget.  Max and Kate Annabel sold a flat in West Hampstead to create a vineyard on limestone hills (which they identified as very similar to the ones they had see on a cycling holiday in Burgundy), and run a conference centre, artists’ retreat in addition to selling some very good wine.

At Martinborough we visited Cambridge Road, where winemaker Lance Redgwell explained how organic and biodynamic approaches underpin as natural approach to winemaking as possible.   A tasting over a delicious dinner explored a wonderful variety of blends of aromatic white varietals and some lovely Pinot Noir.  And at Ata Rangi we met Clive and Phyll Paton, who are Martinborough pioneers.  Despite their exalted status (Clive is an Officer of the New Zealand Order of Merit) they were wonderfully down to earth and entertaining.

I would like to claim a prize for the three consecutive millpond crossings we made of the Tasman Sea, something that is almost impossible to achieve, I am told.  These took us from North Island to South Island, and specifically Marlborough, home of Cloudy Bay.  Which we visited, of course, but probably found Greywacke more interesting.  Kevin Judd was the chief winemaker at Cloudy Bay during its rise to fame, but now makes his own wines, which are superb.

Clos Henri provided a contrast – owned by the Henri Bourgeois family form Sancerre, this had a definite European feel to it, and we learnt about the organic principles underpinning their wine from Fabio, the vineyard manager.  On different tours we visited Johanneshof, whose owners Edel Everling and Warwick Foley set up the estate in 1991 after meeting in Germany, Kim Crawford Wines, where viticulturalists and winemakers took us through their fantastic range of wines, including a tour of a number of their vineyards; and we had a wonderful dinner at Hans Herzog, a Swiss owned estate growing 27 grape varieties packed into 11 hectares, with a fabulous restaurant.

The highlight of our Marlborough visits for many of us was the dinner we had with the Forrest Family.  All three tours had had marvellous visits to the Forrest Estate, each time accompanied by a member of the family, but on the final tour we were joined by John and Brigid, and daughter Beth, to celebrate the New World Open White Wine Trophy won by their Doctors Riesling 2014, literally the night before, at the Air New Zealand Wine Awards.  It was a terrific night, as were regaled with tales of John’s experiences in the wine world, Beth’s next generation input (having just returned to the family fold after five years making wine around the world).

The final couple of days of the tours were in Central Otago .  We visited Domaine Rewa, a tiny estate growing Pinot Noir, Chardonnay, Riesling and a bit of Pinot Gris.  I’ve taken groups to many organic and biodynamic estates over the years but this was the first opportunity to get ‘stuck in’, literally thrusting our hands into barrels of composting cow manure, sunk into the ground around the vineyard.

At Wild Earth we met the American Quintin Quider, a great character who had set up a winery in the Kawarau Gorge.  I think Wild Earth are some of the best New Zealand wines to be found in the UK, and drinking them where they were grown, along with food cooked in Quintin’s gas fired barrel barbecues, was a fabulous experience.

At Valli Vineyards we met Grant Taylor, a Central Otago pioneer, who made the first vintage for Mount Difficulty (who we also visited) and is a passionate advocate of the potential of this region to produce truly top class Pinot Noir.  His contrasting Rieslings were both brilliant, one bone dry from the Gibbston Valley, the other with 33g/l residual sugar from the Waitaki Valley.   And to complete each tour, our final visit was another contrast – the lovely organic Arum winery which focuses on Pinot Gris and produces an incredible line up of Méthode Traditionelle, off dry, rosé and a port style.

Queenstown is a wonderful place to stay and our final night dinners allowed us to admire the fabulous backdrop of mountains and water.  My New Zealand tours were truly amazing, and I cannot wait to return to this breathtakingly beautiful country with its phenomenally generous people.

What my clients said about this tour

“Thank you for making the NZ trip so memorable. There must have been a tremendous lot of of thought to give us such a range of unique experiences; with each one special in their own way it is difficult to highlight one over the others. For me perhaps the shear gastronomic pleasure of the Forrest dinner was as good as you can get.” – Gregor Dixon, Laleham

“I would just like to say how much I enjoyed my first tour with Tim Syrad Wine Tours and would like to say a big ‘thank you’ for all your efforts in making it both so much fun but also so very enlightening. I look forward to a good many more tours in future!” – Richard Disney, Aldworth

“We’ve just spent all evening talking about which wine makers we met and what we drank and ate. I think that speaks volumes about the quality of the tour. Thank you! We met so many interesting characters, all with different individual dreams and goals but with so much in common ultimately. In particular, though, we met legends. What a privilege. Thanks so much, Tim, for a great tour.” – Beryl Wall, Chiswick

Find out about the next tours I am running